I keep changing my header picture hoping it will inspire me to blog. But nada. I think I'm bored of this blog. Of the name, the layout, everything.

All those who think moving to a new space will help, say aye. Those who don't think it will change anything, and that I should shut up and get over myself, keep it to yourself.
So long 2008.
See you in 2009. Or not.
Posted by The ramblings of a shoe fiend at 2:11 PM 22 comments:

A friend recently sent me an email with the subject line. “And you thought one was bad.” The mail contained a link to an interview with Jim Bob and Michelle Duggar from Arkansas. Loving couple, realtors and parents to 17 children. That’s right — 17. As in a prime number following 16. As in a number following 16. As in Josh, Jana, John-David, Jill, Jessa, Jinger, Joseph, Josiah, Joy-Anna, Jeremiah, Jedidiah, Jason, James, Justin, Jackson, Johannah and Jennifer. I almost fell off my chair when a clip from a previous interview showed the couple tell their children (and millions of other Americans) that they were expecting Duggar 18 in 2009. I watched with mounting disbelief as the show host interviewed the couple and their brood of seven girls and 10 boys, asking them if they had picked a name for the next addition to their clan.
Jim Bob struck me as a little smug, as only a man who has successfully sown his seed 18 times can be. But it was Michelle who caught my attention. For a woman who had spent the better part of over two decades either pregnant, giving birth or getting pregnant, Michelle seemed worryingly cheerful. Chipper even. “Why would anyone in their right mind have so many kids?” I thought as I forwarded the link to friends. “They’re nuts,” I told myself. “And she needs a haircut.” After all, it’s one thing to find yourself pregnant with triplets, quadruplets or sextuplets, but it’s quite another to churn out kids like they’re going out of style along with pleather leggings and then say it’s God’s will. Seventeen kids in 20-odd years seem less ‘a blessing from up above’ and more ‘what happens when well functioning reproductive organs are put to use repeatedly sans contraception’. Now some might say, ‘What’s the big deal?’ After all, the world record for the most number of children is at 69. The mother of all these kids was the first of two wives of Feodor Vassilyev, a peasant from Shuya, 150 miles east of Moscow. In 27 confinements, this nameless woman gave birth to 16 pairs of twins, seven sets of triplets and four sets of quadruplets. How interesting that while Daddy’s name has survived all these years, all we know of the poor woman was that she was Biwi no 1. Closer home, our own grandparents effortlessly spawned offspring in the double digits. Again, it looks like the ladies had little to do but grin and bear it. As one friend’s grandmother succinctly put it, “He would come home from work and we would do it. And then I would be pregnant.” Nine times. In our ‘We two Ours one’ world, we tell ourselves that we place the limit at one or two children because we can give them more attention. While that may be true to some extent, I also think it’s because we can’t be bothered to have more kids. Children are expensive, time consuming and want to watch Sponge Bob Square Pants just when they’re going to announce the winner of American Idol. So, if it’s alright for some of us to decide to have none, one or two children, shouldn’t it be okay for others to have as many as they want? Is it alright to use words like crazy and sex-starved when discussing people with large families? Are they selfish for burdening an already crowded planet with more children? Is it fair to question their choices or ask them to consider adoption instead? I’m torn between filing the Duggars under ‘C for crazy’ and ‘N for it’s none of your business’. But maybe if people are putting their lives on TV shows and in the pages of a book, I can question their decisions. 17 Kids & Counting! premiered on TLC (The Learning Channel) in October 2008 while The Duggars. 20 and counting is in a good bookstore near you. ‘...and counting’ — That means there could be more on the way.

This piece appeared here.
Posted by The ramblings of a shoe fiend at 10:15 AM 12 comments: 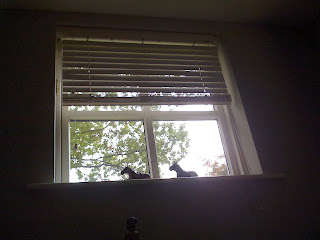 Her favourite time of the day. Her husband is still asleep, soaking his pillow with drool. The new neighbours upstairs have not started moving their furniture around, trying to find the perfect spot for their Poang chair. The house is dark, quiet and the heating comes on with a reassuring hum. She makes herself the first coffee of the day and sits down on the battered red sofa, tucking her feet beneath her, letting her mind inhale the silence.

At first, she is not quite sure she even heard anything. She ignores it, but then it comes again. A shrill scream for help. And another. And another. A woman. The word beats against the double glazing repeatedly, begging to be let in.

She cannot move. She knows she should do something. But what? Wake up her husband? Open the doors and look outside? Call the police? What could it be? A mugger? A chain snatcher? Marital discord? A... rapist?

What could she possibly do? The woman outside is getting angry now, as though she knows people are sitting inside their homes on their battered red sofas, sipping cold coffee, pretending like they don't know what to do. Pretending they cannot hear. Her calls for help are longer, coarser, louder. And then her voice breaks. It is tired. Or she knows no one is going to come.

The light comes on. Her husband walks in, rubbing his crusty eyes.

'How long have you been sitting here?'

'What were you doing?'

'Listening.'
Posted by The ramblings of a shoe fiend at 4:36 PM 6 comments: 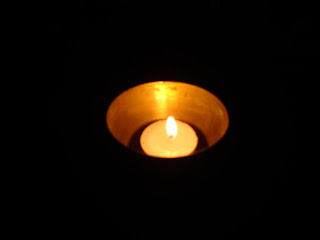 Thank God for tealights.
Posted by The ramblings of a shoe fiend at 6:25 PM 6 comments:

Between your legs the whistle blows

Everyone loves to give advice. EVERYONE. In Mumbai, our bai used to tell me on how to make sambar, ignoring the fact that she was Maharashtrian and I was a south Indian. The lady at the salon, who wields that little spool of thread, likes to tell me how to shape my eyebrows (and, that it’s not a sin to wax certain areas). My husband likes to tell me how to arrange the contents of our fridge and dishwasher. Get knocked up and the advice increases proportionately to the size of your stomach. So you can just imagine how much advice a woman carrying sextuplets gets in her ninth month. So when I ‘fell pregnant’ as one friend said, as though my bump was some kind ebola virus I had caught, everyone had some words of wisdom to pass on to me.
“Listen to only good things. It will make the baby happy.” “Don’t watch violent films.” “Listen to shlokas.” “Don’t watch English films or listen to English music.” “Don’t walk so fast.” “Don’t walk at all.” “Don’t wear jeans.” “Don’t cut your hair when you’re pregnant.” And after the baby was out, of course there was more to come. “Only breast feed.” “Don’t look nice so soon after the delivery. People will cast an evil eye.” “Don’t drink cold water. The baby will catch a cold.” “Don’t keep carrying him all the time” some say before scooping my wailing son into their arms. But the best advice I received was just a few hours after my baby was born. There I was, lying in bed. Sore, bewildered and wondering if they administered nitrous oxide post delivery. Wondering when I could get up to pee, what was for lunch and why on earth there were so many people in a room the size of a supply cupboard. And then, in breezed a family friend. Let’s call her Aunty X. Aunty X is lovely. She brought me fresh snacks every week when I was pregnant. She made me kozhakattais and seedai. She was responsible for about three kilos I gained in my last trimester.
So Aunty X cooed at the baby before, snapping “Keep your legs together.” I raised my head a fraction of an inch and gave her an uncertain look. Surely it was too late for that? I mean that advice would have been fine before I got pregnant, but what was the use of keeping my legs together now? “Keep your legs together, or all the air will enter your body. Through down there.” she whispered. All the air? So my vagina in addition to being a human Suez Canal was now a vacuum pump? Aunty X spotted the bewildered look on my face. “I know what I’m talking about. Keep your legs together now or else you’ll be sorry later. You’ll be full of wind and air and then there’ll be whistling.” Whistling? As in the ‘put your lips together and blow’ kind? Aunty X lowered her voice conspiratorially “Whistling…down there. When you sit down you’ll hear this ‘feeeeeeeee’ sound. Now be a good girl and put your legs together. Have you fed the baby?” Of course, being the good Indian girl I am, I listened to her and did as I was told. Now I wish I hadn’t. I should have let all the wind in and taught myself to whistle show tunes. My home could do with some extra income in these credit crunching times and I’m sure Evita could have used me in their chorus line.

This piece appeared here.
Posted by The ramblings of a shoe fiend at 8:41 AM 19 comments: