When I was in class 6 I had a mathematics teacher called Usha Aggarwal Miss. She terrified me. Usha Miss was convinced I was a makku in mathematics and took great pleasure in conveying this opinion in front of the entire class. Convinced she was right, I decided my only course of action was to fall sick five minutes before maths class was scheduled to start. Headaches, stomach aches, dizzy spells – there was no ailment to large or small for me to suffer from. Of course I didn’t fall sick every day, just once or twice a week. I would inform Usha Miss of my predicament in a well rehearsed trembly voice. If it was a good day she would imperiously flick her hand at the door and it would take all my strength not to skip out of the classroom to the school infirmary. If it was a bad day my pleas would be ignored and I would be directed to the blackboard and asked to solve sums.

The infirmary consisted of a series of dank, musty rooms furnished with little other than beds fitted with maroon rexine mattresses. On some days all the beds would be full and I would be told to sit on a corner stool while other girls lay still on their backs. We weren’t allowed to talk to one another but through silent signals we conveyed our relief. Reciting Wordsworth, remembering the year the Battle of Panipat was fought, marking mountain ranges, rivers and areas with high rainfall on outline maps of India – we had all evaded our demons.

My favourite bed was one that faced the double doors leading to the busy main road. Fitted with window panes that had not been cleaned in decades, it offered a hazy, cobwebbed view of the outside world that never failed to thrill me. Buses, autos, men and women all passed by propelled by the need to be somewhere and do something important. To my 11 year old self they all seemed so grown up and glamorous. I remember thinking ‘One day I will be out there, with places to go and things to do. I’ll be free.’ I would then close my eyes and imagine this older self, breathing in the smell of wilting cotton balls and medicine far past its expiry date. If only my grown up self had known that adults have no infirmary rooms to escape too.

I stopped running away from maths after class 6 thanks to a series of kinder teachers who didn’t think I was a makku. I also learnt that one could sit in the middle rows of the classroom and be invisible.

It’s funny though. All these years later I can still smell the medicine and see the maroon rexine beds… but for the life of me I cannot remember what Usha Aggarwal looked like.
Posted by The ramblings of a shoe fiend at 11:59 AM 5 comments:

Finally, something other than a phone bill 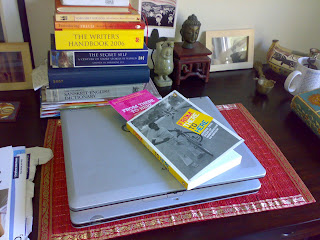 A copy of 'From There to Here: Sixteen true tales of Immigration to Britain' and an invitation to the launch party. 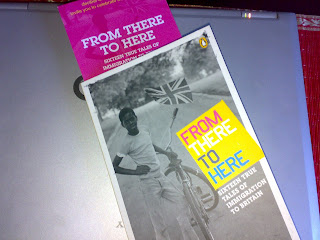 (Falstaff, please note presence of a computer. Charu, I tend to write all first drafts longhand.)


And look at the first story. 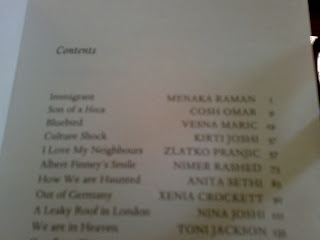 Those interested can purchase a copy here.
Posted by The ramblings of a shoe fiend at 11:23 AM 21 comments: 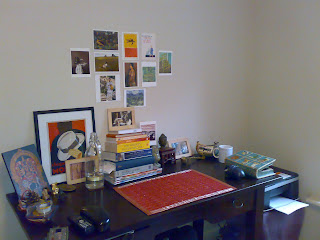 And a nice view doesn't hurt. 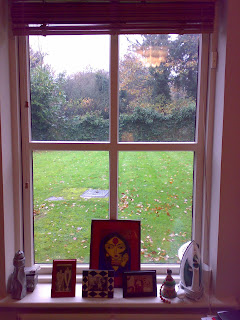 After writing at the dining table, on the sofa, in bed, on trains and buses I finally have a space to call my own. Of course, I have acquired this space in what one could call a dry spell. Writing I mean.
Posted by The ramblings of a shoe fiend at 1:58 PM 11 comments:

She does not know how long she has been waiting at bus stop C. Her feet are numb, her forearms ache and her palms burn at those places the twisted carrier bag handles meet flesh. It is early evening. Or late afternoon. She cannot tell. The effort required in lifting her arm and pushing back a woollen coat sleeve to look at her watch is daunting. The sky is inscrutable, a shade of purple interior design magazines like to call Aubergine. Aubergine. How sexual, exotic and desirable they make the squishy brinjal sound. She enjoys these little mental detours. They take her mind off waiting for the bus and wondering how long she has been waiting. Minutes, hours, days…. Weeks? Why is no one looking for her if she has been missing for weeks, waiting for the H17 at bus stop C? It has been raining for some time now. The wind tugs the hard pelts of water about on an invisible leash so that every now and then a droplet or dozen lands on her face. Mixing with the tears. She is not crying because she is sad. Oh no. It is the wind. It stings her eyes and makes them water. She makes no attempt to wipe the tears away, opting to produce a few of her own so that passers by get startled when they see her: a woman with plastic bags in her hand crying at the bus stop. Has she been alone at the bus stop all this time? Of course you have silly, who wants to share a bus stop with a crazy crying woman? This means there is no one to ask when the bus will come. Perhaps the bus has come and gone and she, intent on startling passers by and wondering about the sexuality of aubergines (colour not vegetable) has missed it. Perhaps it slipped away as she stared at nothing just as he had crept away while she slept. He did leave you a note she reminds herself, it wasn’t as though you woke up and he was gone. A note. And his toothbrush, a half empty box of Wheetabix and the garbage. She still had the note, toothbrush and box of Wheetabix. The garbage she had to throw away after a month. ‘It stank’ the neighbours complained. They were probably still upset about their cats. It had been an accident. She hadn’t meant to. There she went again. ‘Focus’ she tells herself, ‘you’re here to catch the bus’ and wonders what colour the interior design magazine would call the block of red trundling by.
Posted by The ramblings of a shoe fiend at 8:03 PM 3 comments:

In a recent edition of the Guardian Book Club podcast with Jeanette Winterson, the author tells a story from her early life. On revealing that she had fallen in love with another girl Winterson was issued an ultimatum by her mother: stay and be straight or leave the house. She chose the latter, and as she walked out of the house her mother called her back. Winterson, thinking that perhaps her mother had changed her mind turned around only to be asked

"Why be happy when you can be normal?"

The interviewer John Mullan and the audience laughed spontaneously, and so did I. But later on when I was thinking over it, I realised that it's a question we are all asked and often ask ourselves. Not overtly. Not aloud. But quietly. And persistently. It's the raised eyebrow when we tell people our choices. It's that moments hesitation before we take decisions. The tone of disapproval in conversations. Why are you doing this when you could do that and be safer?
Posted by The ramblings of a shoe fiend at 1:23 PM 2 comments:

obviously i am having issues with my blog. from retro martini swigging typists to a serpent that says 'blog?' instead of ... I don't know... 'hisss?' I guess this is the blogging equivalent of getting a tattoo. or a red sports car.
Posted by The ramblings of a shoe fiend at 11:10 AM 34 comments:

My ideas have been turned in to turd like lumps
who shall save me from this dump?
Posted by The ramblings of a shoe fiend at 12:05 PM 6 comments:

I don’t know what it was that made me think of them, but yesterday as I washed up after lunch at the kitchen sink and looked at the Autumn leaves swirling down to the ground I was reminded of the small cement patch at the rear of my house in Madras that Amma calls the garden. It’s had its ups and downs over the years, the malli took off spectacularly for a while and the parijatham has been going strong for some years now. But I will always associate my mother’s garden with the hibiscuses that flowered there. Bright red, palest orange with whitish centres, baby pinks. Every morning they’d be plucked - some still buds – by my mother before neighbours and early morning ramblers could snake their hands over our compound wall and pluck a few for themselves. The buds would be dropped in water and those that had bloomed would be placed in a bowl set aside for her daily prayers. After they had wilted they would be preserved and every weekend the dried, blackened petals would be boiled in water and the sticky goop produced be added to the shikai that was pounded in to our heads by Meenakshi, our diminutive but freakishly strong house help.
When I moved to Bombay there was no place for a garden, not even a small patch of cement in our first apartment. The second was no better but the living room had a massive window that was fitted with an ugly grill our where the landlord had left behind some potted plants. Taking that as a sign, I decided to turn it in to a garden of sorts. For one the creepers and hanging baskets hid the ugly grill while still offering a tantalising glimpse at the old crumbling Parsi mansion opposite our flat. There was a plant nursery on the grounds of the mansion and one of the first things I bought there was a red hibiscus plant. I can still remember my joy at the first signs of a bud. A great achievement for someone who had in the past managed to even kill a money plant. My hibiscuses were small and petite, not big and blowsy like the ones that grew in my mother’s garden. They hardly ever produced enough goop for a shikai bath but every morning I would open the window while I had my coffee and check to see if there were any flowers for my prayers.

I still can’t think why I was reminded of them yesterday. I hadn’t thought of them before. Not in three years almost. And now I can’t stop thinking about them.
Posted by The ramblings of a shoe fiend at 10:39 AM 2 comments:

In this week's Travel section of Mint.
Posted by The ramblings of a shoe fiend at 2:03 PM 2 comments: