Whatever happened to using breasts for world peace?

US Americans, 'The' Iraq and how the US should help South Africa and Asian countries so that they can build up their future... listen and learn.

Posted by The ramblings of a shoe fiend at 7:49 PM 5 comments:

if you could start all over...

would you still want to be you?
Posted by The ramblings of a shoe fiend at 7:14 PM 17 comments:

saints, shoes and sunsets ... on the beach, barefoot in Barcelona 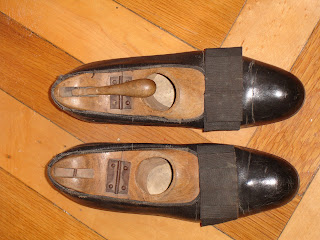 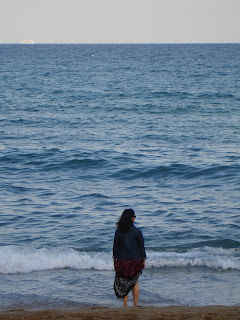 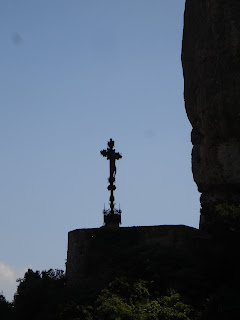 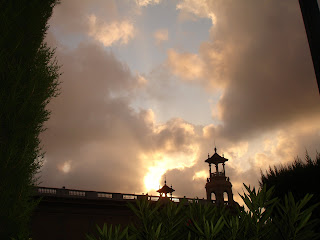 seems so far away now...

Minimalist hotel rooms and Gaudi...two ends of the spectrum... 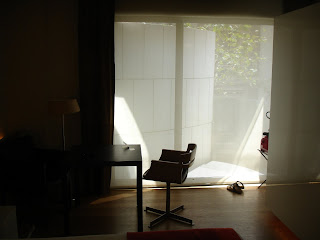 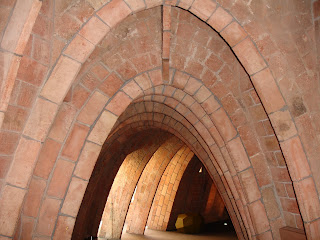 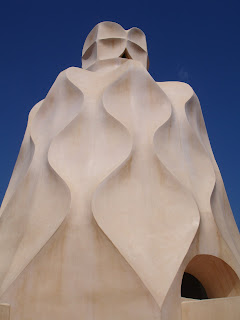 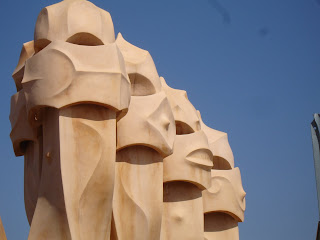 The flag hung limply in the still afternoon heat. The rose petals that had fluttered to the ground as the tricolour unfurled now lay crushed and brown. He scanned the quadrangle, filled just a few hours earlier with singing and saluting children, the grand sounds of a band and shouts of 'Vande Mataram'. He jostled the sticks of his broom in to place before bending over and running them across the ground in sweeping strokes. The country was 60 years old they were saying. He wondered how old he was - a year or two over 60? He worked his way across the ground in straight lines, pausing every now and then to catch his breath and massage his aching knees. How much longer would he have to work like this? There was a daughter to get married and a son who wanted to go and work in Dubai . The latter alone needed a down payment of Rs.50,000. He had about Rs.15,000 in the bank and there was the peon in the headmaster's office who got him this job. That was another Rs.10,000 to think about. Sitting on his haunches, he allowed himself to think of the future. No debts, children married and supporting their parents, perhaps he could even go back to his village and buy a sari for their family deity. It was a long standing dream of his. His eyes swept the ground and came to rest on a small yellow object a few feet away. Crawling forward he picked it up. It was one of the sweets they had given the children. He brushed the dust off it it and opened the jewel like wrapper, staring at the treasure that lay inside. He looked around him, but the ground was empty. Smiling, he put the chocolate in his mouth and savoured the burst of intense sweetness. Picking up his broom, he continued sweeping the ground in precise straight lines, wondering when he would reach the end.
Posted by The ramblings of a shoe fiend at 7:55 AM 5 comments:

I'm dipping in and out of this collection of Raymond Carver stories. The stories are not very long, but he manages to reel you in, often in the first few lines. The characters are fascinating, and I am often left wondering about them long after I have read their stories. I love these small glimpses in to people's lives and thoughts. He hints at the past, suggesting things or planting ideas in your head. If he were alive, I would be his groupie.
Posted by The ramblings of a shoe fiend at 11:49 AM 2 comments:

a character from one of my stories I no longer need... not for now anyway
*

Rajeshwari had turned mad in her late teens. No one could explain why. She had come home from school one day crying and red cheeked, refusing to tell anyone what had happened. Soon after that she began acting strangely. She developed an appetite that put the heartiest of men to shame. She was found outside the local wine shop, jostling with lorry and rickshaw drivers demanding to be served. She answered back, would be morose and then all of a sudden as though a light had been switched off she was back to her old mild mannered self.
Unable to cope with her affliction (or find a prospective groom who hadn’t heard of it) in the small town they lived in, Sita’s grandparents and her Chitti moved to the city and boarded with Sita’s family. Sita’s parents had been told that the young girl was depressed, that she was bored of small town life. But when Rajeshwari Chitti started talking in strange voices – as a young child, a drunkard, sometimes an old crone who spoke only in riddles – they realised there was more to her problem than a mild depression. Sita had been six or seven when her mother’s family had arrived. In the six months they lived with them she would often be woken up in the middle of the night by her family’s frantic shouts as they searched for Rajeshwari who disappeared in the middle of the night. The house (and the entire street) would be roused as they went in search of her, finding her curled around the thick trunk of the mango tree that grew in the Xavier’s courtyard fast asleep or sitting on the water tank shouting at the moon. The neighbourhood delighted in this of course, the last excitement they had had was when Chandru had failed his board exams. The Mamis would all congregate at Sita’s house the morning after such incidents, headed by Janaki Mami to counsel and console.
“Don’t worry, once she gets married, everything will be alright” Janaki Mami would opine, before slipping away with Indra’s mother to discuss all they had seen, heard and said.
And so, following the common wisdom that marriage was the panacea Rajeshwari needed, she was married to the first young, unsuspecting bank clerk they could find. But a year later and she was not cured. In fact she had become worse, adding to her repertoire of voices and disappearing acts a sudden aversion to sleeping and bathing. Her husband who had soon realised his wife’s problems were more serious than the fact she had had a sheltered upbringing (as the family insisted after she tore his silk shirt and scratched him on their wedding night) complained to the family that they had to stop her nocturnal, noxious wanderings. A priest was called and consulted and after scrunching his eyes shut and flaring his nostrils he determined that 4 spirits were residing in Sita’s aunt’s body. An exorcism was arranged and a small donation of Rs.30, 000 was made to the temple trust. The exorcism took place at Sita’s house. She had spent most of the time hiding her face in the fragrant pleats of her grandmother’ sari, too afraid to see what visuals accompanied the piercing screeches that echoed throughout the house. The exorcism had not helped and Rajeshwari Chitti had died not long after it after losing her balance and falling from the water tank. The Priest acquired a new moped.
“But she died a married woman’ the ladies of the neighbourhood had stated ‘What more
could a woman ask for?”
Posted by The ramblings of a shoe fiend at 3:29 PM 13 comments:

Newsround on CBBC tell's the real stories of children living in poverty through a series of beautifully animated shorts. (Link via ammani)
Posted by The ramblings of a shoe fiend at 9:15 AM No comments:

the guilt of not writing is worse than the guilt: of eating three chocolate bonbons too many and not jogging for a whole week and going to sleep with your make up on and eating a whole tub of ben and jerry and pretending like you can't see the guy who's selling a Big Issue and not getting up for the pregnant lady because you stupidly wore high heels that have not been broken in and then assuage your guilt by convincing yourself that she's probably not pregnant and that if you did offer her your seat she would get affended the guilt of not writing is worse than: saying you have a headache when you don't and not answering phone calls from friends because you're watching Frasier or reading Harry Potter and watching bad reality shows and pretending like you don't and serving paneer butter masala from M&S and passing it off as your own and lying about who ate the last chocolate bon bon.
Posted by The ramblings of a shoe fiend at 10:07 AM 8 comments:

The hidden moralist in me felt Anna deserved to be separated from her son, after all, what mother would would leave her husband and son for a toyboy? But a few chapters later I would be convinced that we all deserved to seek out true love and to hell with the kids and the consequences. There were times when I disliked Anna and times when I sympathised. She was needy, selfish and vain. Kitty whinged and Levin was morose and jealous. Stepan philandered and Karenin was both Saint and Devil. Dolly was a do-gooder. I loved it. It's been a while since I read a book where most of the main characters were so flawed.
Posted by The ramblings of a shoe fiend at 8:20 AM 1 comment: