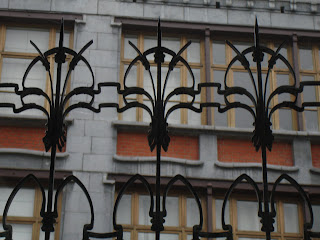 (A piece I wrote on Brussels, that nobody wanted. boo hoo.)

Past travels in continental Europe and the Far East have proven that it’s not all slim pickings for vegetarians such as myself. Paris has its croissants, Rome offers the weary herbivore pasta in arabiatta sauce and enough Udupi restaurants abound in Interlaken for it to qualify as a suburb of any Indian metropolis.

So when the good people at Lonely Planet informed me that the Belgians like nothing more than a spot of horse meat for lunch, I wasn’t unduly worried. If worse came to worse then I would merely waffle my way through our weekend in Brussels.

We arrived close to noon and after we’d checked in to our hotel and jumped up and down on the beds (Why not? I didn't have to make them in the morning) we decided the exertion of sitting out the 2 hour Eurostar journey from London had worked up a considerable appetite. On the advice of Didier, our smiling concierge we headed to rue de Bouchers. This cramped street reminded me of the alleys radiating out of the Piazza San Marco in Venice. Waiters and managers stood under striped awnings, joshing one another good-naturedly in an attempt to lure diners in to their establishments. Mussels, fish and crabs were displayed on beds of ice next to large boards informing us of the day’s special. None hinted at anything even remotely vegetarian. After turning away from a succession of places, I read the glint in the eyes of my carnivorous companions as ‘choose lunch or be lunch’. So we turned in to the next open door and sat down to a somewhat forgettable lunch. I say somewhat because two out of four of us were satisfied. My boiled vegetables and cheese omelette did little for my piqued appetite, though it did arouse my curiosity – since when did an omelette and veg cost over thirty euros?

Lunch had done little for my appetite and so I was understandably overjoyed at the sight of the gluhwein and waffle stalls that dotted de Grote Markt (called Grand Place by the French). Gluhwein translated means ‘glowing’ wine and is similar to what the English call mulled wine. With the chill seeping in to our bodies, the lightly spiced, hot drink was a soothing restorative and put some spirit in to our step.

The Grand Place’s title as one of Europe’s most beautiful town squares is well deserved. Hemmed in by imposingly ornate baroque and Gothic buildings on all sides, in the fading later winter sun, the gilded colonnades and ornate doors of The Town Hall and Guild Houses are a sight to behold.

Housed in the King’s House, The Brussels City Museum flagged itself out with strident red and green pennants. Not wanting to be called philistines and eager for some warmth (the gluhwein was but a temporary remedy) we trudged inside. Small, beautiful to behold and not offering a great deal to see The Brussels City Museum is much like the city it showcases. And with its high vaulted ceilings, worn wooden floors and wide staircases it seemed more a grand home than a museum. The portraits of ruff collared gentleman sporting jewellery (an eighteenth century precursor to bling perhaps), antique maps and a rather puzzling shelf filled with ornamental ceramic cabbages caused my friend to remark that the entire museum would easily fit in to a minor gallery of the V&A.

Though if one does persevere there’s something definitely worth seeing. Housed on the third floor is the dressing room of Belgium’s most famous urinating tyke – the Mannekin Pis (a well chosen name I think). Fashioned as a walk in wardrobe of some sort, the gallery has more clothes on display than even Carrie Bradshaw could imagine. Bemused visitors can look at replicas of the statue attired in everything from an Elvis costume to a Maharaja’s bejewelled angharkan (gifts from visiting heads of states apparently) all provided with appropriate apertures for the young man to relieve himself.

Feeling unsettled by the bizarre exhibition (because that’s exactly what it is), we felt a waffle was just what we needed to restore our balance and headed to a trendy café just outside the Grand Place.

The waffles or gauffres were divine. Crisp and dusted with a smattering of sugar, it seemed impossible that these light as air culinary creations could be high in anything let alone calories. Some advice though to first time waffle eaters, quash desires to try the ones smothered in chocolate and banana slices (called gauffres de Bruxelles) and try them neat (gauffres de Liège) instead.

Our rather ho-hum lunch had left us determined to make a better go of dinner. But after our afternoon tour of his wardrobe we were keen to see Mannekin Pis in person. Tucked away on the corner of Rue de L’Etuve & Stroofstraat, the tiny (in every way possible) statue has been piddling away since 1619. The look on everyone’s face said the same thing: apart from the juvenile hi-jinks of seeing someone pee, exactly why is he so famous? Obligatory photographs taken and voyeuristic needs fulfilled, we ventured in to one of the many kitsch pubs (all named after Mannekin) in the area and sampled some of Belgium’s best brews. Light blonde Leffs and Kuacks (served in equally quirky bulbous glasses) were the perfect precursor to our dinner at Le Cap. Situated on Place de la Vieille Halle aux Blés, Le Cap is a fashionably French Brasserie with a touch of Belgian flavour. While there was no horse meat on the menu, everyone enjoyed some traditional Franco-Belgian fare while I helped myself to some of the best spaghetti I’d ever eaten (not that odd considering I’ve had fabulous aloo subzi in Edinburgh of all places). Dessert was a three tier chocolate mousse for me though I couldn’t help but longingly look at my friend’s choice of warm strawberries with peppercorns and ice cream. I had a bite, and it was a wonderful explosion of cold, hot, spicy and sweet sensations. All this was washed down with some very fine Bulgarian wine and at the end of the evening I would have paid someone to carry me back to the hotel.
*
Brussels seemed slow to wake up to Christmas Eve and the near empty streets reverberated with the bells of The Cathedral of St. Michael and St. Gudula tolling out Joy to the World. Despite our best intentions to walk we hopped on to the first tram we saw trundling our way and sat back as the Museum of Musical Instruments, Palais de Justice, the Palais de la Nation and the Museum of Modern Art overwhelmed the quiet morning scenery with their size and heavy style.

We alighted at a stop just off the Avenue Louise (Brussels’ very own Bond Street) and had a chance to admire the art nouveau balustrades and stained glass windows whose fluid lines, curves and arches were echoed in the Centre Belge de la Bande Dessinée (the very impressive French name of the Comic Strip Centre). Everyone from Tin Tin to Lucky Luke to the Smurfs co-exist in a riot of glorious colour in Victor Horta’s classic art nouveau building. After two hours of fun pretending to be Red Rackham and posing with Snowy, we lunched at the centre’s Brasserie Horta. I quickly forced myself to eat another plate of spaghetti, but had no problems reprising waffles for dessert.

Satiated, we slipped in to Galeries St Hubert, a gorgeous, glass roofed arcade in the center of town lined with cafes and luxury stores selling outrageously priced lace doilies and tapestry foot rests. It has the distinction of being the first shopping arcade in Europe and the refined bustle of last minute Christmas shoppers did feel as though it belonged to a different time. Miles away from the frenzied Sloane Rangers no doubt causing havoc on Oxford Street at that very moment.

There is something distinctly old world and courteous about Brussels. Now that may not seem like much, but it makes for a refreshing change from busy city life as we know it. Head there for a weekend of leisurely walking, shopping and eating. New year resolutions can always wait.

(Ps. Though a travel article of mine should be appearing in the April issue of Marie Claire, India :))
Posted by The ramblings of a shoe fiend at 1:01 PM

awesome! You've written so well on Brussels, my fav city [for more reasons than being my 1st foreign city] - Did you not wait till night and see the son et lumiere show at grand place? That's delightful, though now when I think about it, it's on in summer I believe.
Their gaufres are awesome. Being a veggie myself, those were all I'd feast on, and AV Louise was my haunt the 1st few weeks. We stayed in a flatotel at the end of that av - towards the bois, and Ive feasted many an ice cream flavors at the Haagen Daazs at the other end.
Did you like the tunnel rides? :)

this is all awesome! makes me want to go there :)

I'll wait for the Marie Claire. I suspect you're blase about Brussels and it shows in the writing.

The ramblings of a shoe fiend said...

Rads - Thanks. How long were you there?

J.A.P - Well, not my farvourite destination but I found it charming and a welcome break. Oh, the article in Marie Claire is ALL about shopping.

Congrats on the Marie Claire credit!

Hmm......Brussels has always seemed slightly boring. But then again what do I know having never been there.

oh, about a good 2.5 years. Stayed in Ixelles, near the Vrije University [the dutch part of the Brussels Univ]

Way to go, shoefie! Today, Marie-Claire India, tomorrow, the world! You're on your way, yaay!

That 30 euro omelette is a tourist trap! They lure you with the 15 euro mussels plate and make the money off the poor vegetarian sod. Belgian cuisine doesn't really offer much vegetarian food, except for pommes frites (fries).

You can get excellent Italian and Thai food in Brussels though. The trick is to move away from the Grand Place area and you can find some really great restaurants (around Sablon, Ave Louise)

I am as excited as rads to read about brussels. it was my home for over 2 years and i totally love that city.

Did you see the female equivalent of the M. Pis...the Janneke Pis? I like that statue a lot better....though, there is no running 'waterfall' and change of costumes. there is an outstanding bar right opposite that offers 3000 varieties of beer. (imp info for your next trip to Bxl)

anjali - don't quite know if you'd read this, but this Brussels-period - early, mid, late 90's?
..and you sound awfully lot like an Anjali i knew there in Woluve...

But then again if you were that Anjali, you should've recognized my mug a few thousand pounds later :))